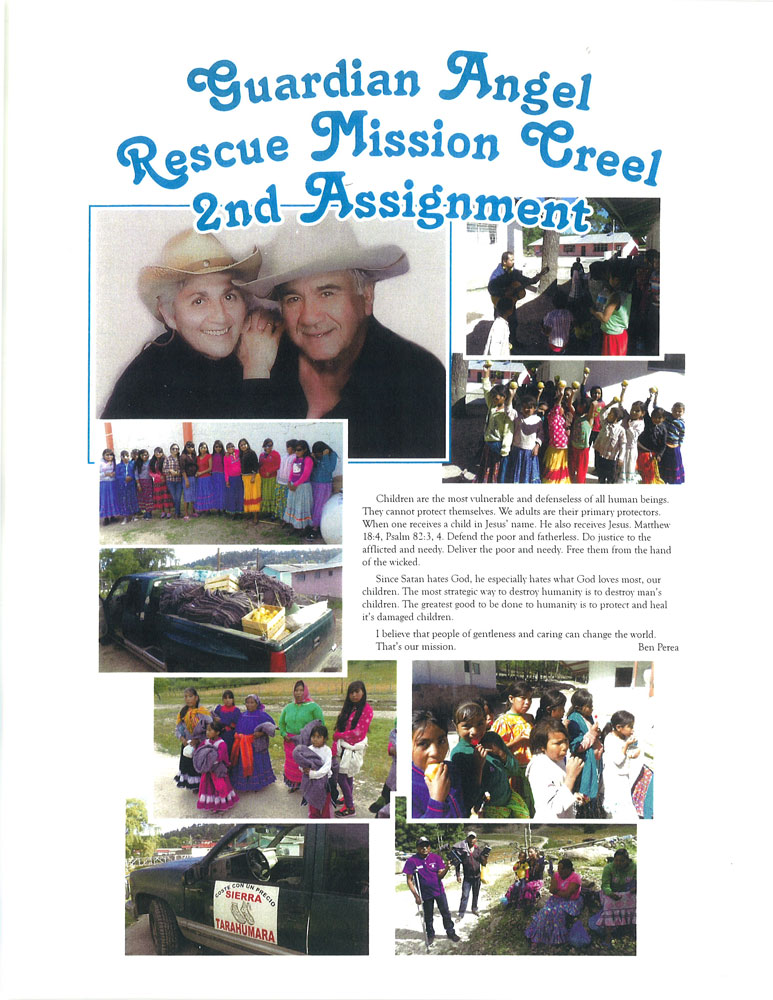 Pueblo Cooperative Care Center offers prayers, support and assistance to Ben Perea and his rescue ministry serving the Guardian Angel Rescue Mission for poor and impoverished children in Mexico.  The ministry, founded by Perea is a mission of love that serves children who live in poverty, face child abandonment, crime and depression. Perea, at age 80 is a retired contractor who made a vow to himself; and a promise to thousands of children thousands of miles away that he would do all in his power to be a beacon of hope in the seemingly insurmountable midst of heartbreak. Perea made the decision to take on this great ministry and accepted the challenge of restoring hope to children who need it the most. “It was the scariest moment of my life" Perea says and "I knew the odds were against me…but if not me, then who? There would never be a perfect time."

On occasion, items are donated at Pueblo Cooperative Care Center to support this ministry. Sometimes, unusable items (not designated for use by Pueblo County residents) are donated to Perea for distribution in Mexico rather than being discarded. A strong local supporter is Madison Tatinski, who supports Perea with her “Madison’s Mission” by donating crocks and other shoes through Pueblo Cooperative Care Center and she specifically designates these for the Mexico ministry.

Perea and his team regularly arrive with food, toys, clothing, blankets, water and, perhaps most importantly, optimism. Children are happy to be at the rescue mission and they are thankful for the difference Perea and his associates make. Perea often focuses his efforts to an area in Mexico where the need is much greater and the stakes much higher.  Perea and his team go to nearly inaccessible mountain dwellings where as many as 60 abandoned children live in undesirable and unbearable conditions. On a regular basis (almost monthly), Perea, and oftentimes Calvin Turner (Turner Roofing) or Dave Feamster (Little Caesars Pizza) make the long and treacherous journey through drug cartel country and up into mountain ranges without roads.

Through the years, truckloads of donated blankets, water, food, clothing and other life-sustaining essentials have been handed out to the children who eagerly await their arrival. Perea often takes pinto beans from Rusler Produce to the mountains so the children will have life-sustaining foods. Perea says "The Mexican government won't go up there unless the military is with them because this is drug cartel country. It's dangerous, and there's not even a road, it's a trail.” Perea has had guns pulled on him, his life threatened, and his vehicles stolen throughout the years. Perea believes that someday he may not return because of this violence, but adds “my love for these children is stronger than fear.”  Perea believes he serves a great God and states “I won't stop going because these are children who have nothing, not even clean water. Many have been sexually abused, some murdered and if it wasn't for our efforts they might starve." "God expects my arms to be outstretched and extended like his," and "my responsibility is to be the compassionate hand of God."